The season’s fan favourites and drama sources take the hot seat at The Bachelor’s Women Tell All to answer the questions posed by Chris Harrison and the other contestants. Though lots of questions get answered, a whole lot more start bubbling to the surface. 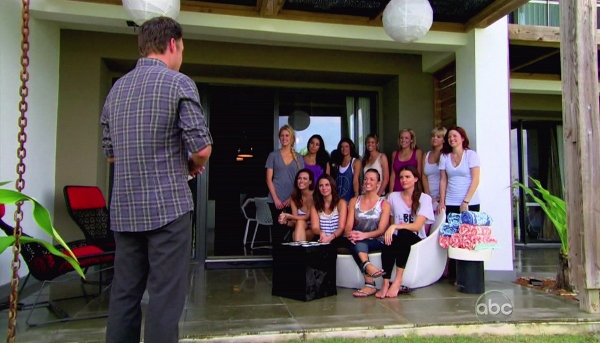 Though the women may have been angry and hostile towards Shawntel when she arrived at the rose ceremony months ago, they clearly have regrets about the way they behaved that night. Shawntel expresses how hurt she was by the comments made in regards to her “big thighs” and being “less attractive in person.” The women explain why they reacted the way they did, apologies abound, and everyone’s mostly hugs and giggles by the end of it.

The women talk it out

Is Casey S. back with the boyfriend she left behind? Why was Jenna such a wreck in every episode? What made Jennifer get sent home after a seemingly perfect series of dates? Well, unfortunately, those questions go unanswered as discussions of Courtney take centre stage. The eliminated ladies describe her as a liar; manipulative, hurtful and in it to win it. There is rousing applause when Nicki reveals her views on Courtney’s recent sentimental flip by saying “I don’t buy it for a second.” But the true test comes when Courtney puts herself in the hot seat.

Unlike the hard exterior and stinging comments that Courtney launched over the course of the show, she’s all apologies at The Women Tell All. It’s very hard to make up one’s mind as the camera flashes back and forth between Courtney’s talk of regrets and the other women, violently shaking their heads in disbelief. Did she, as she claims, have a complete change of heart after having a couple of days to herself? Or is she merely trying to save face, as the other ladies claim? Does she genuinely regret the way she behaved around the other women and the consequences of her actions, or are her tears simply her attempt to make the transition from model to actress? Tune in next week for the finale of the show as well as After the Final Rose, to (hopefully) get some solid answers!

The Bachelor’s Kacie B: “What the f*** happened?”
Is The Bachelor cursed in love?
The Bachelor Ben Flajnik Shares His Strategy For Finding Love