No need to pinch yourselves; this is not a dream. Snooki is rumoured to be engaged to her boyfriend Jionni LaValle. But wait — there’s more… 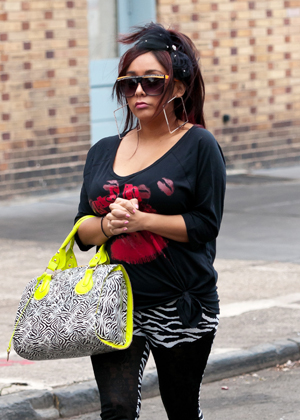 Dear, Almighty Zeus! The hairspray and tanning business is definitely going to flourish and prosper.

Nicole “Snooki” Polizzi, star of Jersey Shore, is engaged to boyfriend Jionni LaValle and, reportedly… pregnant with his child!

Le gasp. Say whaaa…? A ring and a little meatball? Too much for our little mortal hearts!

A close source confirmed the engagement to People magazine and claimed that the couple is already making plans. Of course, a mysterious source who knows everything… But we’ll take it.

Here’s what Snooks had to say in January (let’s call it foreshadowing): “I know he’s the one so I know the ring’s gonna come soon. Well, not soon-soon. He knows it should be big, because if it’s small I’m saying no. Like, ‘Get another ring!'”

Snooki recently moved and is now sharing a house with Jenni “JWoww” Farley, which will be used in their new spin-off reality series. Initially, the programme was to focus on the two friends; but now, it might chronicle Snooki’s journey through pregnancy. What a glorious happening for the whole world.

There is no mercy. Sooner or later there will be a Snooki Jr. That’s when you know it’s time to flee the continent… Australia sounds nice. Good luck to all!