This is totally, like, a reunion! Keanu Reeves reportedly has another installment of Bill and Ted and their adventuring excellence in the works, with Alex Winter reprising his role as Bill. How are excited are you?! 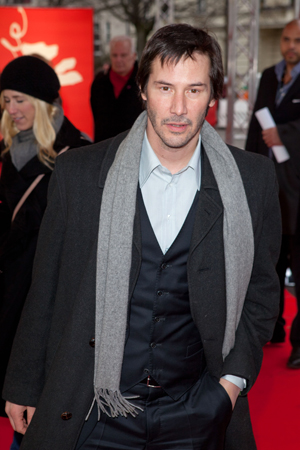 The word on the street is that there may be one more excellent adventure left for Bill and Ted. That’s right, Keanu Reeves — who was in the original (1989) Bill and Ted’s Excellent Adventures and its sequel Bill and Ted’s Bogus Journey — is in talks with writers Chris Matheson and Ed Solomon about a possible reunion with Alex Winter for another Bill and Ted flick.

“We have a script, we’re trying to put it together right now. It’s a good script too,” Reeves stated in Independent newspaper. “I would love to play the role and I’d love to work with Alex and Chris and Ed again.”

The original films not only propelled Keanu Reeves’ career, but have also become cult classics, leaving us with numerous hilarious quotes and memories. Who wasn’t totally in love with the Wyld Stallyns?
There is no word yet on a set plot, but Reeves has previously claimed that Bill and Ted may be forced to go back in time to try to save the world. Cue dramatic music.

“When we last got together, part of it was that Bill and Ted were supposed to have written the song that saved the world, and it hasn’t happened.”

There you have it. Now, the idea of two middle-aged men travelling back in time and using ’80s slang is not the most appetizing; but for the sake of keeping the dream alive, we’ll give it the benefit of the doubt.