Oh, why not? She’s done everything else.Â… According to reports, Lady Gaga has scored a minor role in the next Men in Black film. Aliens and secret agents Â— very Gaga-esque. 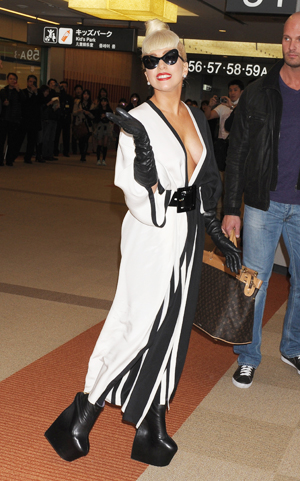 If you think the world could not be any more Lady Gaga-fied, you are so wrong.

She already dominates pretty much every music video channel and radio station in the world; now, Gaga is planning to hit the big screen. In a recent interview, Will Smith has confirmed that Gaga will be making a cameo appearance in the upcoming film Men in Black 3.

“We have a couple of celebrity cameos, but I cannot reveal who they are. We must keep it a surprise that Lady Gaga appears,” Smith told ElCorilloRD.com. According to reports, other stars — such as Mike Tyson, Betty White and Nicole Scherzinger — are expected to appear in the film as well.

Surprisingly, this will be Gaga’s first big-screen appearance, but probably not the last. It is rumoured that Quentin Tarantino is seeking to cast the eccentric singer in the next Kill Bill movie. Crime, vengeance and gore… seems right up her alley, actually.

Maybe there should be more concern for the fact that there will be another installment of Men in Black, instead of Gaga’s cameo role in it.… Opinions?