Canadian Prime Minister Stephen Harper has congratulated the Oscar nominees and winners through an issued statement. And a warm cloud of care descends upon us… 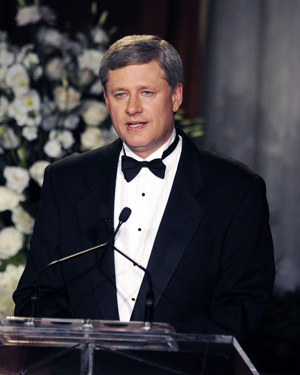 After bringing home the gold — the gilded Oscar statuette, that is — Christopher Plummer received yet another honour, which came in the shape and form of a congratulatory statement from our Prime Minister, Monsieur Stephen Harper.

“On behalf of all Canadians, I would like to congratulate Christopher Plummer, and all others recognized at this year’s Academy Awards in Hollywood,” said the statement issued by Harper.

“Receiving an Oscar is the film industry’s highest accolade. Canadians have always had a strong presence in the international film industry, and the number of Canadian nominees this year is a true testament to the quality of the talent coming from our country.”

Not everyone is worthy of acknowledgement from the mountains of Parliament, so this is kind of a big deal. It’s actually refreshing to see that the government dedicates a fraction of its attention span to the arts.

So, Plummer is not only the proud owner of an Oscar, he is also the twinkle in Stephen Harper’s eye, which is quite an accomplishment all on its own.

We side with Harper on this one, and hope that Canadian talent will continue to flourish and flood the streets of Hollywood. Make Mama proud, kids!