Ben and the final three ladies travel to Switzerland where they embark on dates filled with metaphors for what it means to be in a relationship. Feelings deepen and relationships develop as each of the women spends more romantic one-on-one time with Ben. 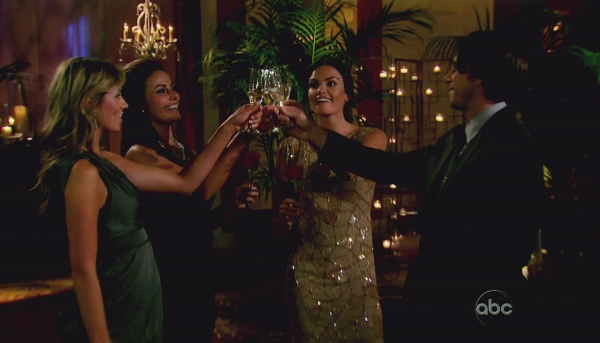 During the dates, the couples fly in helicopters, propel down cliffs and picnic on romantic hillsides — but the activities are all just building blocks leading up to the big question of the night — will each of the ladies join Ben in their respective fantasy suites? After a series of oddly suggestive commentary where the women and Ben refer to “opening up,” being “ready for it” and getting to “that vulnerable state,” they all accept his offer. There are hot tubs and fireplaces for all in the romantic chalet suites and Ben comments on how much his feelings grow for each of the women after their “time” together.

The woman who began the season by antagonizing the other women in the house seizes her one-on-one time with Ben to apologize for her past actions. She explains that she is disappointed by the way she behaved and wishes she had done things differently. Ben seems reassured by her comments and they proceed happily with the rest of their evening. So, which Courtney is the real one? Only time will tell.

Final three … plus one?

Things take an unexpected turn when Kacie comes all the way to Switzerland to get answers to why Ben ended things between them. He reveals that he felt they were “two worlds apart” and didn’t see her in the end. She takes the hard answers with grace and seizes her final opportunity to warn him about Courtney. After getting the answers she needed and cautioning him about getting hurt by picking the wrong woman, she leaves for home and Ben is once more sent into confusion over what to think of Courtney’s past actions.

But after a wee bit of back and forth he settles once more into his old plans and chooses to keep Courtney around. Ben tells a disappointed but poised Nicki that he cried that day at having to send her home. She departs while Lindzi and Courtney are left in the running.

Tune in next week for the girls’ tell-all when Shawntel returns once more and Nicki is given the opportunity to confront Ben about his decision to let her go. And in two weeks from now we’ll finally know who wins it all!