Up here in the Great White North, we are all very proud of the wonderful Christopher Plummer and his first Academy Award win, which was also historically significant. 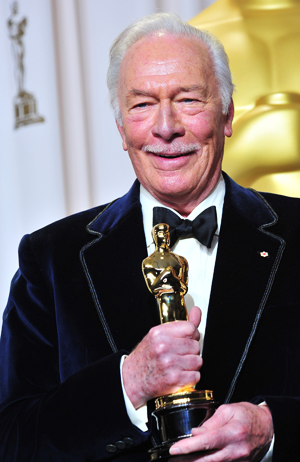 Sheer joy and delight filled the Academy Awards as the dapper gentleman in a midnight-blue velvet blazer was handed the iconic statuette for Best Actor in a Supporting Role to the magnificent sound of a standing ovation.

Toronto-born Christopher Plummer, 82, became the eldest recipient of an Oscar last night, awarded for his stunning performance in Beginners, co-starring Ewan McGregor, in which he plays an ailing man who finally embraces his homosexuality after his wife passes away.

“You’re only two years older than me, darling,” joked Plummer to his Oscar. “Where have you been all my life?”

Plummer’s speech was gracious and humble; he acknowledged fellow nominees, friends and family on both sides of the border, and he closed his speech with the warmest, most earnest thank-you yet.

“…[my] long-suffering wife, Elaine, who deserves the Nobel Peace Prize for coming to my rescue every day of my life.”

That may be the cutest acceptance speech in history. And hopefully everyone noticed his loyal, subtle tribute to his nation embodied by the pin of the Order of Canada on the lapel of his blazer — a very nice touch we appreciate.

A wonderful celebration of a talented man! Mr. Plummer will be returning to Canada soon for the Stratford Shakespeare Festival this summer.