Sacha Baron Cohen is trying to prove the theory that he has no conscience. He arrived at the Oscars in a controversial costume and even debuted his new accessory – Kim Jong-Il’s fake ashes. 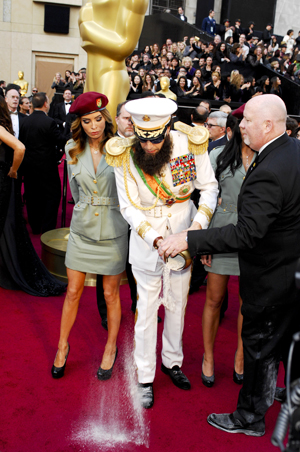 So long as Sacha Baron Cohen lives and thrives, the Oscars will never be dull. But it’s only a matter of time before he gets punched in the face.…

Dressed as character Admiral General Aladeen from the new film The Dictator, Cohen arrived at the red carpet sporting an urn supposedly containing the ashes of the late North Korean leader Kim Jong-Il, which the actor later dumped on TV presenter Ryan Seacrest.

Earlier last week, Oscar organizers warned Cohen that he would be banned from the show if he pulled any stunts. The actor obviously threw caution to the wind, showing up decked out in costume and accompanied by two female bodyguards.

“I’m wearing John Galliano… the socks are from K-Mart,” Cohen told Seacrest. He then threw the contents of the urn onto Seacrest, before being pulled away by bodyguards. The TV host laughed it off and stayed a good sport throughout the whole ordeal, which is commendable. Anyone less tolerant would have stitched out an extensive array of unmentionable words while playing drum-set with Cohen’s face. So, Mr. Seacrest, well done!

The actual substance in the urn is rumoured to have been pancake mix.

Of course, if you tell Cohen not to show up as a controversial dictator character, he will do the opposite. But you have to admit, he’s got spunk, and he certainly leaves a lasting impression. Whether it’s favourable or not is up to you.…