At least she has pride! Miley Cyrus was photographed visiting a marijuana dispensary; wonder if she has a discount card or a coupon.Â… 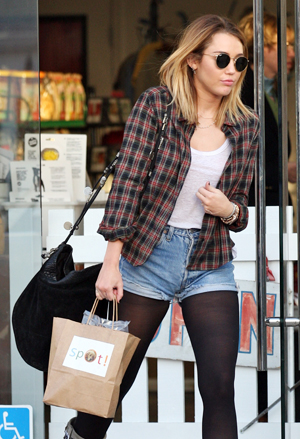 Oh, Miley Cyrus, you are the apple of the public’s eye. In case there is any confusion, Ms. Cyrus is not the lovechild of Disney and good marketing. Although she rebels against that pure image, just like all of her predecessors did.…

The angelic image of a holy icon, Ms. Cyrus was recently spotted doing a bit of shopping avec friend at a medical marijuana dispensary. Nothing like herbal inspiration for a young musician, eh?

Ms. “Endless-supply-of-cut-off-jean-shorts” Cyrus previously proclaimed her adoration for the herbe at her nineteenth birthday party, when her friends gifted the actress with a Bob Marley-shaped cake.

“You know you’re a stoner when your friends make you a Bob Marley cake. You know you smoke way too much f****** weed!”

Oh, the truth. Ms. Cyrus’ publicist jumped on that statement, claiming that it was intended as a sarcastic comment. So, the actress’ visit to a marijuana dispensary must be an allegorical depiction of liberty.… It’s all very philosophical.

She could have just been accompanying a friend in need, but where’s the fun in that? Kids these days… Food for thought.