Oh, the tears of joy! The wondrous time is upon us: In a little over a month, Lindsay Lohan could be a free woman. She’s nearing the completion of her probation and we’re giddy with excitement! 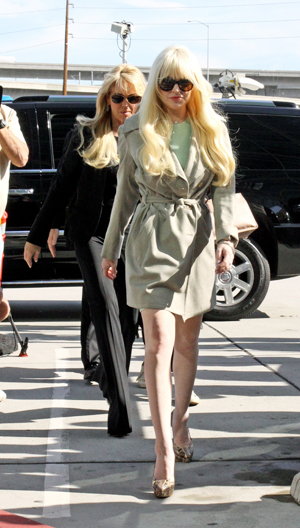 Run ye, children! Ring the church bells, bring out the flowers, set off the fireworks — Lindsay Lohan‘s probation is coming to an end!

“Miss Lohan, you’re in the homestretch,” Los Angeles County Superior Court Judge Stephanie Sautner eerily told the actress, who came to the Airport Courthouse for a probation progress check. “You seem to be getting your life back on track.”

Are those not the greatest words ever said?! Lohan’s probation for the shoplifting and drunk driving convictions will be over after 14 more days of community service and five more therapy sessions, which — if she cooperates — should be done by March 29.

Judge Sautner warned Lohan that after March 29, she will be on “informal probation” and must avoid any run-ins with the law. Which, for our main heroine, will be a tough feat to perform, but — fingers crossed — she has divinely straightened out.

Lohan has been crime-free since 2011, when she stole a $2,500 necklace from a jewellery store in Venice; and she has since met all her court dates. So, we see a flicker of goodness in those eyes.

Oh, Zeus be merciful! Maybe a career revival is at hand, maybe her red hair will reappear, maybe everything will go back to the way it was.… Dare to dream! Godspeed, good people.