She would probably not let Matilda do her makeup, but Michelle Williams is open to a collaborative effort with her 6-year-old daughter on her red-carpet outfit. Should we expect a pink tutu? 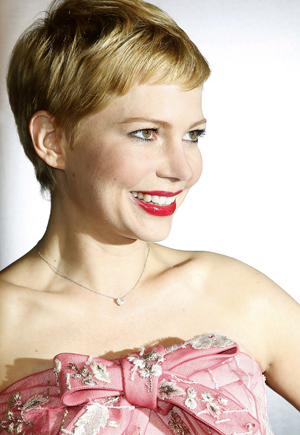 Michelle Williams is arguably one of the most adorable actresses in the history of the universe and her daughter is equally as precious!

The little Matilda, 6, is going to help her mama — who’s nominated for her role in My Week with Marilyn — get red-carpet ready for the Oscars. There might be some macaroni and glitter involved.…

Williams’ friend Busy Philipps told E! News that both of their daughters will be involved in the Oscar preparation.

“Both of our daughters will be around, that’s always a little chaotic,” Philipps said. “The little girls like to see their moms get dressed up and then they don’t want us to leave.”

The Cougartown actress said that Matilda and her daughter, Birdie Leigh, will be occupied while the grown-ups attend the award ceremony.

“Matilda’s got all her family with her and my daughter will be with them and my husband,” Philipps stated. “So I think they’re going to be together. We’ll have them have a little playdate. So cute.”

Cute, indeed. They could have a little Oscar-themed tea party, a private circus in the living room or a royal ball.… Too much? It’s like Christmas all over again, except we’re excited to see how Matilda will style her mum!