She’s not just an astonishing actress, or Marc Jacobs’ fashion muse; she’s also a possessor of a British honorary title. Now that’s not something everyone can brag about at the water cooler. 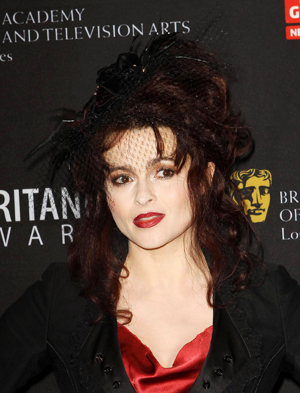 The ever-so-quirky Helena Bonham Carter had a big day today. The actress was made a Commander of the Most Excellent Order of the British Empire (CBE) by Queen Elizabeth II.

Carter attended the ceremony wearing a very appropriate tartan outfit and an adorable hat; she was accompanied by partner Tim Burton and children Billy Ray, 8, and Nell, 4.

Although her new title does not allow a prefix of “Dame,” it is nonetheless a great honour for the actress, who coincidentally played Queen Elizabeth’s mother in The King’s Speech. Maybe they chuckled about it upon meeting.

“I am thrilled, though not sure that I deserve it,” the actress stated. “I always thought my father deserved a medal for facing 25 years of chronic disability with quiet daily heroism so I am delighted to accept such a wonderful honour in his memory.”

Next up? The actress will appear as Miss Havisham in Great Expectations, a film adaptation of Dickens’ novel of the same name.

She’s brilliant at what she does, so we could not be happier.