We’ll have what she’s having! Reese Witherspoon talks about having more kids and locking lips with the beautiful people of Hollywood. This is just too good. 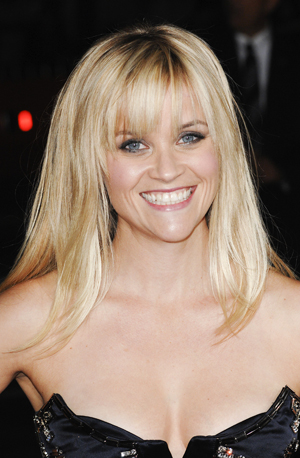 No, Reese Witherspoon does not have a bun in the oven — but she wouldn’t mind if she did.

The actress already has two kids from her first marriage to Ryan Phillippe: Ava, 12, and Deacon, 8. But Witherspoon wouldn’t mind having more little ones with her current husband, Jim Toth. On being asked whether she wants another child, the actress said:

And Witherspoon assures us that she is a regular mum, who embarrasses her children just like everybody else.

“The other day I was dancing around the house when they came in and literally stared at me like, ‘Oh my God, that’s so embarrassing.’ But I didn’t stop. You can’t stop dancing,” she stated. “It’s usually country music and my kids just plug their ears and pray for the song to end!”

Nothing like country music to get those feet moving, eh? But while Witherspoon awaits pregnancy, she’s keeping herself occupied by making out with Chris Pine and Tom Hardy in the film This Means War.

“It was a lot of fun making out with two very handsome guys. A girl couldn’t ask for more than that.”

Preach it, girl! Now, that’s what we call shooting two birds with one stone. This mother of two has still got it going on, hollaaa.

4 mins ago
by Julia Teti

50 mins ago
by Summer Cartwright