Adele is joining the dark, mysterious, rascally group of middle-finger-showers; the whole world gasps. The singer flipped off the cameras after her acceptance speech was cut — but apologizes. 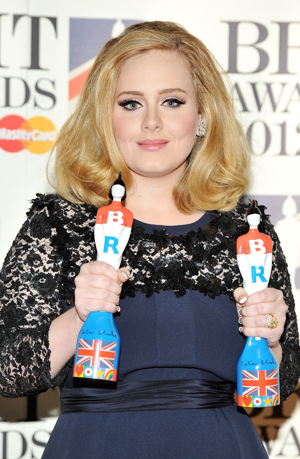 From now on, every award category Adele is nominated in should prohibit other contenders… fewer tears dropped that way.

The 23-year-old singer already needs a palace to house her Grammys; now, she can add two BRIT Awards to that jolly family of statuettes. She swept the ceremony and skillfully picked up the Best Female Solo Artist and the mouth-watering Mastercard British Album of the Year for 21.

“Nothing makes me more happy than winning six Grammys and then coming home and winning two Brits,” said the singer, after picking up the final award of the night.

Unfortunately, it is not her incredible win that’s making the headlines. Naughty Adele flew the one-finger salute when her second acceptance speech was cut short due to time constraints. She quickly tried to patch things up with an explanation and an apology:

“I’d like to say, I got cut off during my speech for Best Album and I flung the middle finger. But that finger was to the suits at the Brit Awards, not to my fans.

“I was about to thank the British public for their support and they cut me off, and I’m sorry if I offended anyone but the suits offended me, so thank you very much for all of your support.”

But the media and fretful parents are unforgiving. Of course, everyone forgot about her talent and success, because there is nothing more outrageous in the world than the middle finger. We should bring back the age of sex tapes as a reminder of what a real scandal looks like.