It was a confusing night of switcheroos as Ben lost connections with those who once seemed to be the front runners and gained speed with early write-offs. After tonight it seems like a whole new game when it comes to who is going to win the heart of The Bachelor. 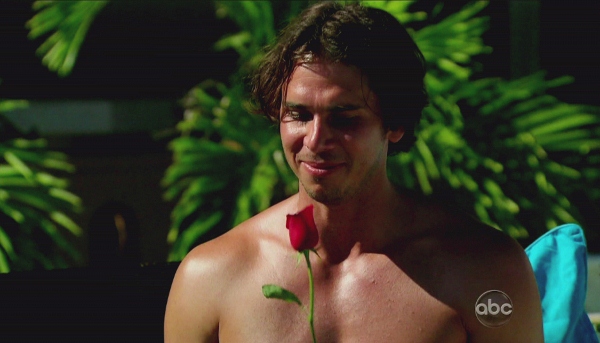 Ben starts off his hometown visits at Lindzi’s parents’ ranch in Florida. In a day of horse-themed activities, Ben has an amazing time and quickly earns the approval of Lindzi’s parents. By the end he even goes so far as to announce “I think that I might be falling in love with Lindzi.” So her fate seems pretty secure going into the rose ceremony.

Unfortunately, Kacie’s hometown is something else entirely. Ben’s visit to Tennessee winds up being a big bummer of a day. Her dad doesn’t want them rushing into things, her mom lays down the law about them moving in together before marriage and Ben seems thoroughly exhausted by the whole thing. All the connection they had in their very first one-on-one seems to have fizzled entirely.

After that disaster, Ben rushes off to meet Nicki in Texas. Despite some intitial hesitation, her family quickly jumps on board the Ben train. At the end of the evening Nicki, admits that she loves Ben. He, however, remains suspiciously tight-lipped. Though, he does remark on his later interview that there were moments where he thought: “I love this girl.” At this point it’s hard to really determine how he feels about this Southern belle.

The final date of the night is by far the most confusing of them all. The editing room seems to make an interesting shift in this most critical of episodes by switching from all crazy shots of Courtney to focusing entirely on her being vulnerable. Up until now Courtney has come off as the girl girls love to hate and Bachelor history indicates that no one is happy when that one wins. Could this mean they’re attempting to lead the viewer into liking Courtney in preparation for her being the winner? Hmm…

When it comes down to it in the rose ceremony, everything that seemed clear in the first couple of episodes of the season gets flipped on its head as Courtney’s name is called first and Kacie is sent home.

Kacie has a very upsetting departure as she tearfully remarks: “I loved him and I don’t know what to do next.” If Emily Maynard hadn’t long ago been announced as the next bachelorette, we’d have our bet placed on Kacie. But for now, she leaves the show surprised and heartbroken — and is sure to have a thing or two to say at the “After the Final Rose.”

Stay tuned next Monday when the final three get slimmed down to two!

The Bachelor Ben Flajnik Shares His Strategy For Finding Love
The Bachelor’s Emily: “Courtney is self centered!”
Jennifer Love Hewitt Will Not Be Tuning In To The Bachelor