Smells like a feud… Miranda Lambert has no problem with being heard. Once again, the singer slams Chris Brown and his success. 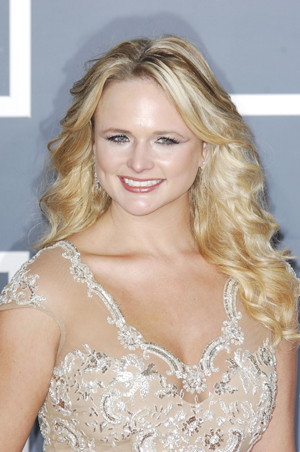 You know how sometimes you get this paranoid feeling that someone can’t stand your guts, but there’s no way to know for sure? Well, Miranda Lambert makes this situation a lot easier — she just full-out tells you.

The wife of Blake Shelton, Lambert made it clear that she does not like Chris Brown: first, at the Grammys, when she tweeted, “And Chris Brown twice? I don’t get it. He beat on a girl.”

Second, on Thursday during a concert at the University of Massachusetts; before singing “Gunpowder and Lead,” a song about a woman shooting an abusive husband, she put up a neatly lettered poster reading, “Take notes Chris Brown.”

Whoa, we’d better hide before the eye-poking begins — or its modern equivalent, the epic Twitter war,  where no one is safe and nothing is too sacred, all at 140 characters or less.

“I’ve been in a world of hurt with Chris Brown fans lately… but see, I just have to speak my mind because where I come from, beating up on a woman is never OK,” Lambert told her crowd. “So that’s why my daddy taught me early on in life how to use a shotgun.”

Now, there’s a woman with a strong will! In a battle of words, Lambert may have it in the bag. Opinions?