The gossiping world has been a-buzz with the news of Judi Dench’s vision loss. Is it really as bad as it sounds or just a bunch of hubbub? 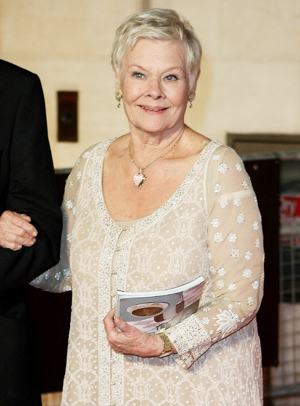 Some of us take innate pride in being able to diagnose ourselves with non-existent incurable ailments through medical information websites, and others do not have that luxury.

For your education, here’s le scoop: Dame Judi Dench, 77, is battling blindness, the Daily Mirror reports. The Oscar-winning actress has been diagnosed with macular degeneration, a medical condition often leading to total loss of vision due to damage to the retina.

“I can’t read scripts anymore because of the trouble with my eyes,” she told the Mirror. “And so somebody comes in and reads them to me, like telling me a story.”

Although it’s a little heart-breaking, let’s not get hasty and go wailing in the town square. Macular degeneration is no fun, but it specifically affects the central vision while the peripheral remains unbothered, allowing the person to perform their daily tasks. Also, Dench has undergone a treatment for the condition and it appears to have stalled the further deterioration of her vision.

“I do not wish for this to be overblown,” Dench told Reuters. “It’s something that I have learned to cope with and adapt to — and it will not lead to blindness.”

There you go, kids, she’s a tough cookie. But does this mean that her acting career is over?

“As long as there is a possibility of working, I’m not going to retire,” Dench said. “If I retire, nothing will work anymore, and it’s hard enough as it is.”

Bam! This woman is a rock. We look forward to seeing her in the next Bond film extravaganza. Godspeed!