After being grilled by the media for her attendance at a dictator’s party, Swank refuses to reveal what she has done with the fee paid for her appearance. 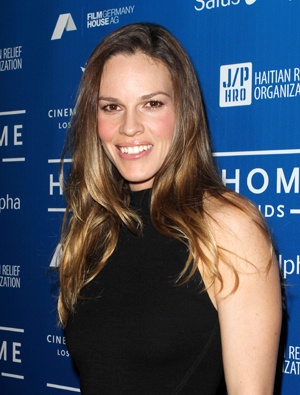 Ahoy, there’s trouble on the horizon once again for Hilary Swank. The actress made headlines in October for her controversial attendance at Chechen president Ramzan Kadyrov’s birthday party.

Kadyrov is known for his extensive corruption and violations of human rights. Obviously, Swank did not look good partying it up with this violent dictator.

After getting enough heat from the press to roast a herd of gazelles, Swank issued an apology and promised to use her personal appearance fee for charity.

Now, exiled former Chechen leader Akhmed Zakayev wants Swank to provide details on the charities she donated money to. But she declined his request.

Swank’s rep issued a statement via The Hollywood Reporter, saying:

“Over the last four months, Hilary has been working directly and privately with various human rights organizations and other charities — giving both her time and financial resources. At the request of such organizations, and consistent with Hilary’s longstanding practice of donating anonymously, she will not be publicly acknowledging her contributions and efforts.”

While it is noble of Swank to remain anonymous, it would rectify her previous actions if proof was given that she has actually donated the money to worthy causes. Otherwise, it’s all up in the air.