We all noticed the reruns, but now we know why. The Colbert Report postponed new episodes because of an emergency in the host’s family. 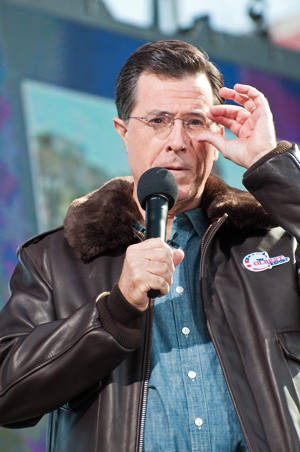 It’s not all fun and games for American funny-man Stephen Colbert. The production of his show , The Colbert Report, has been temporarily shut down due to a family emergency.

The prospective audiences were notified on Tuesday that “due to unforeseen circumstances, we have cancelled our taping for the date of your ticket reservation, Feb. 15, 2012.”

No official statement has been made to reveal the nature of the family-related emergency, but New York Post reported that Colbert had to rush to his 91-year-old mother’s side due to her ailing health. He is the youngest of 11 children and has a close relationship with his mother.

For the time being, the Comedy Network is set to replay old episodes of the show until production resumes next week. This is the first time that The Colbert Report has shut down production.

Hard to pull any jokes out, when the man who practically invented satire is going through tough times. We must resist. Thus, the best of wishes to Monsieur Colbert!