Are we going to see Lil Wayne in a tux? Maybe… The rapper reportedly asked his girlfriend the big question, but there’s more to this story than meets the eye. 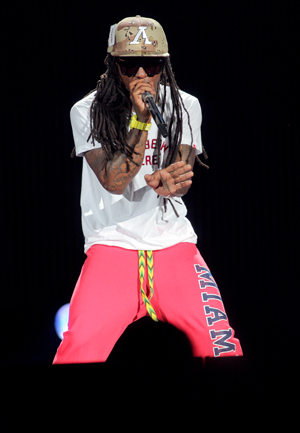 Do we hear wedding bells?

According to reports, Lil Wayne popped the big question to his girlfriend Dhea on Valentine’s Day, and she accepted his proposal.

The rapper sent the gossiping world a-whispering about wedding plans after his mysterious tweet saying, “She said yes!”

MediaTakeOut.com reports that Wayne’s girlfriend is also pregnant with what would be his fifth child. The 29-year-old rapper had his first child when he was only 15, with Antonia Carter, to whom he was married from 2004 to 2006, and another three kids with Lauren London, Nivea and one unknown woman.

Lil Wayne is set to release a memoir in November based on journal entries from his 8-month-long imprisonment for gun possession in 2010. Maybe he could squeeze a wedding in there somewhere?

Let us grab our favourite wedding catalogues and start planning.