And the wheel turns on and on; nothing is ever new. Sean Penn once again decides to assume the position of an unaccredited charge d’affaires by criticizing British political tactics and alleged war-mongering. 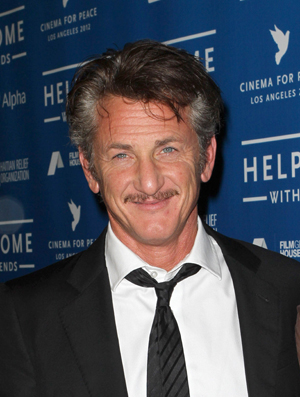 Bad boy, bad boy, whatcha gonna do when they come for you?

Oh, the wondrous ways of human nature. One always assumes that because one has a mouth it has to be used constantly to blab.

Case in point: eactor Sean Penn dove into some hot water after running his mouth off about Prince William’s deployment and British politics.

Penn accused the Brits of pushing for war with Argentina over a handful of islands, primarily the Falklands, where Prince William is currently completing his search-and-rescue helicopter training.

“There are many places to deploy a prince,” Penn stated. “It’s not necessary, when the deployment of a prince is generally accompanied by a warship, to send them into seas of such spilled blood.”

Those are fightin’ words. It is true that William was escorted by a British destroyer, the HMS Dauntless (clearly, the unnerving name is not helping), but the British government claims that the ship’s deployment is standard procedure. Penn is not convinced.

“It’s unthinkable that the United Kingdom can make a conscious decision to deploy a prince within the military to the Malvinas, knowing the great emotional sensitivity both of mothers and fathers in the United Kingdom and in Argentina who lost sons and daughters in a war over islands with a population of so few.”

Ay, not good. It is a bit curious that warship deployment to the region would be routine, considering the islands’ bloody history with the Brits. But is Penn really the best authority on a political matter of such grand proportions? He may be overstepping the line…

The British media and government obviously did not take his comment lightly.

“What on Earth has this got to do with Sean Penn?” current Tory MP and former army officer, Patrick Mercer told the Daily Mail. “He’s neither British nor Argentine and seems to know nothing about the situation judging by his moronic comment. A good number of his movies have been turkeys, so I suppose we shouldn’t expect much better coming out of his mouth.”

Holy fish and chips! Penn better start penning that apology before someone throws down a glove in his path or worse… Challenge him to cricket!