Why is this happening? First, the cutest couple ever, Klum and Seal, separate. Now, the singer takes off his ring! It’s too much to handle.… 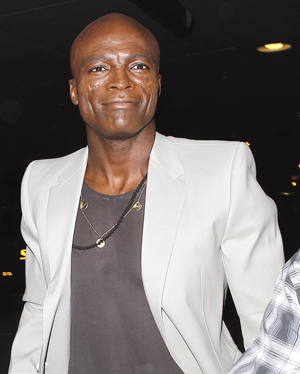 While some of us are still hyperventilating into a paper bag, going through the five stages of grief and unable to cope with the Seal-Klum separation,  others seem to have moved on.…

For example, Seal himself.

Here’s the story: the former couple — Heidi Klum and Seal — continued to wear their wedding bands post-separation, and while Klum still has hers on, Seal was spotted yesterday arriving in Australia sans ring. What gives?

Let’s investigate. The singer justified his wearing of the ring on Ellen last month, saying, “I think it’s just pretty much a token of how I feel about this woman. We have eight years. Eight wonderful years together. Just because we have decided to separate doesn’t necessarily mean you take off your ring and you’re no longer connected to that person.”

That makes sense; and so, logically, if the ring no longer remains on his finger, can we conclude he has moved on?

Say it ain’t so! Maybe he’s getting it polished, or bedazzled; or maybe he took it off to do some gardening and just forgot to put it back on. Who knows?!

Neither Seal nor Heidi made any comment. But we’re still desperately hoping that these two can work it out…