Yikes! If it’s not one thing, it’s another. Marston Hefner was held in custody on suspicion of domestic violence against his girlfriend. Was he charged? 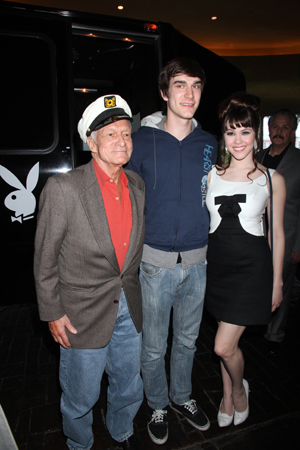 Not a particularly romantic story but here it is: Hugh Hefner‘s son, Marston, was arrested Sunday for an alleged assault on girlfriend Claire Sinclair, the 2011 Playmate of the Year.

The couple lived together in Pasadena, Los Angeles. The police received a phone call reporting domestic violence and apprehended Marston at the scene. Hefner was released Monday morning on a $20,000 bond.

Sinclair, according to police reports, suffered minor injuries and is seeking a temporary restraining order but claims she will not press charges.

“All I want is for Marston to give a public apology,” Sinclair said Monday, “and I want him to get psychiatric help. I want him to admit that he did hit me more than once.”

According to TMZ, Hugh Hefner released a statement regarding the arrest, saying, “If they care about each other, they’ll patch it up.”

For the love of suffrage! This may be a little old-fashioned, but we don’t usually encourage victims of assault to “patch it up” with their abusers. If someone ever raises their hand to you, it’s a celestial sign for you to bolt outta there faster than Roadrunner.

Hopefully, we’ll be hearing about Marston’s public apology and not the couple’s reconciliation in the near future.

Crystal Harris has no love for Hugh Hefner, but his exes do!
Hugh Hefner ‘dead’ again
Hugh Hefner planks; fad is officially over