Somebody’s in divine trouble. The Catholic Church is not too keen on Nicki Minaj’s performance at the Grammys, nor on her Pope-impersonating escort. 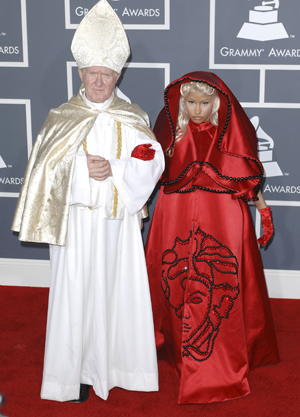 Nicki Minaj is just throwing logs onto the eternal fire which is to contain her, at least from the point of view of the Catholic Church.

Surprise! Minaj’s Grammy performance, which included an exorcism, a confessional and mockery of practically the whole Church hierarchy, is not sitting too comfortably with the Catholic League.

“None of this was by accident, and all of it was approved by The Recording Academy, which puts on the Grammys. Whether Minaj is possessed is surely an open question, but what is not in doubt is the irresponsibility of The Recording Academy. Never would they allow an artist to insult Judaism or Islam,” read the statement, entitled “Is Nicki Minaj Possessed?” from Bill Donahue, president of the League.

The performance was, yes, not an accident; but making a statement meant to expose the insulting nature of Minaj’s show while insulting her in turn with an “an open question” about whether or not the singer is possessed is a little hypocritical, no?

Especially since employing elements of Catholic symbolism to express an artistic vision seems hardly insulting, unless one officially decrees all components of religion to be off limits to imitation or inclusion in any type of art.

Admittedly, the Catholic Church is a popular source of mockery in the music industry, most likely because of its docile disposition.

In consequence, Minaj defended her performance by explaining that it was a part of her male alter ego, Roman.

“I had this vision for Roman, for him to be exorcised, but people around him telling him he’s not good enough, that he’s not normal, he’s not fitting in with the average Joe. He wanted to show that not only is he amazing and confident, but he’s never going to be exorcised and when they throw the holy water on him, he rises above it.”

Whether or not the concept of an alter ego rectifies the arguably offensive portrayal of the Catholic Church is up for grabs. We’re more interested in the fact that Minaj has an alter ego, and apparently more than one.

Should we be expecting more such vivid performances? If so, the Catholic League will have to buckle up for one bumpy ride.