It was an evening of clashing viewpoints and scathing comments as the final six ladies duked it out to determine which four would get to take Ben back to their hometowns. 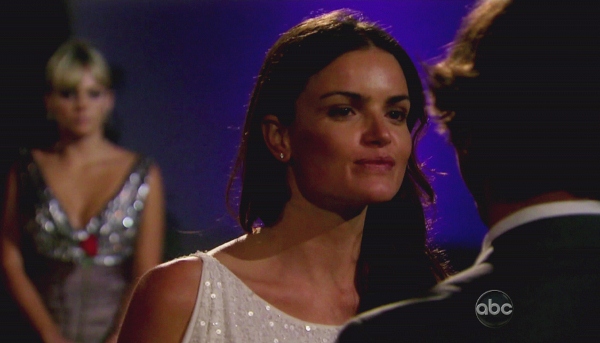 The night started out with Ben open endedly stating that “the feelings of love are there […] but I’m not ready to tell anyone that yet.” However, as the evening progressed, who he was referring to became overwhelmingly clear.

The drama really started to simmer when the second one-on-one date card arrived for Emily. Courtney was not pleased with this news and for the first time seemed to express genuine hurt and sadness. After a solid amount of grieving at the fact he was on a date with someone else she stated: “if I don’t get a one-on-one I will not be accepting the rose from Ben.” Bold words. But the point was moot as she did in fact get the third one-on-one and was back on track in a snap.

On their date, Ben said to Courtney that during group dates she’s “the one that consistently seems to care.” Seems to care or seems to be consistently in the buff? Hmmm. Regardless, he later said: “I see my life with this woman.” With such comments being made it seems hard to deny that Ben is quite smitten with Ms. Courtney and his final proposal may be set in stone already.

During the group date between Ben, Kacie, Rachel and Nicki, Courtney somehow managed to find herself looming over their conversation from a balcony overhead where she witnessed that Kacie had received the rose for the group date. She commented that this didn’t worry her as Kacie’s “like a little girl in a little boy’s body” before remarking on how catty all the other girls are. Hmmm … could one detect a hint of hypocrisy in such a statement?

The ripping comments flew during the final rose ceremony as Ben pulled Courtney aside to ask her why none of the other girls were getting along with her. While she was gone Emily expressed her wish that Courtney be sent packing and stated “my condolences to whichever man you end up with.” Unfortunately for her, Ben deemed Courtney’s explanations satisfactory and it was Emily and Rachel that were eliminated. As they departed Courtney murmered “see ya, wouldn’t want to be ya!”

More drama is sure to be had as next week Ben sets off to meet the families of Kacie, Nicki, Lindzi and Courtney!

more articles on the bachelor

The Bachelor: Does Courtney Robertson Have A Sex Tape?
The Bachelor Week Seven Preview: The Black Widow?
The Bachelor’s Courtney: “You better check yourself b****”