Oh, boy. Things would be so much easier if people could dress up like animals in films and shows, as in the olden days. Alas, another show is under fire after two horses die due to injuries sustained on set. 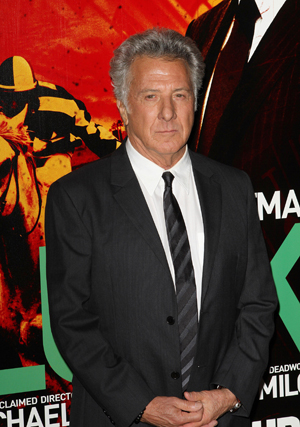 The network galloped to the rescue of its brand-new show Luck, after accusations of animal cruelty gained momentum in the media.

The racetrack drama starring Dustin Hoffman drew criticism from animal-rights groups when two horses were injured on set, and were consequently euthanized.

HBO issued a statement through E! News in response to all the hubbub:

“From the very outset of this project, the safety of the animals was of paramount concern to us,” the statement read. “Recent assertions of lax attitudes or negligence could not be further from the truth. We partnered early on with American Humane Association, who is the only mandated authority in the industry, and we work very closely with the AHA and racing industry experts to implement safety protocols that go above and beyond typical film and TV industry standards and practices.”

That may arguably be the official slogan of every production to ever come under fire for injuring an animal.

Liike a mischievous child, the TV industry seems to — figuratively speaking — stick its fingers in its ears and deny any accountability for the injuries until it turns purple in the face, instead of simply accepting the responsibility like a grown-up. And really, if all the safety precautions were in place, how did the horses get injured?

HBO gambles on another season of Luck
HBO’s new show Luck wants to give you cash
Matthew Broderick, Dustin Hoffman share The Tale of Despereaux