Now here’s something you don’t see every day. Taking a break from his feuds, Fiddy helps those in need on the most destitute continent. 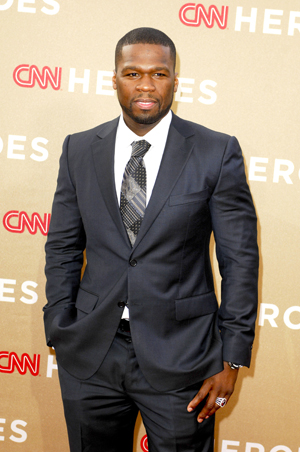 Who would’ve ever guessed that 50 Cent has such strong philanthropic inclinations?

The rapper is on a voyage through the impoverished regions of Africa surveying the impact of war and destitution.

On Wednesday, he toured the camps in Somalia — a country torn and distressed by decades of war.

“What I am seeing is devastating — these women and children have risked everything to come to this Somalia camp, just to get food,” he said. “They need our help.”

But he didn’t stop there. On Thursday, 50 Cent also visited the orphaned children in Kenya’s largest slum.

“To meet those kids was so inspiring, they have nothing, yet they are so positive and optimistic,” the rapper was quoted saying in a UN World Food Program statement.

This trip was planned to bring more attention to the poverty and starvation on the continent, especially after the droughts in the Horn of Africa.

And we still think it’s tough for us in North America… What, with House being cancelled, the last slice of pizza being eaten and with almighty Zeus continuously tormenting us with never-ending traffic! The horrors!

But perhaps we can follow 50’s example — at least, in this matter — and extend our arsenal to include some humanitarian goodness in it. What say you?