So, Conan the Barbarian and Rocky walk into a hospital… True story. Both of the actors turned up in the hospital yesterday, separately, and unaware that they were literally only an arm’s length apart. 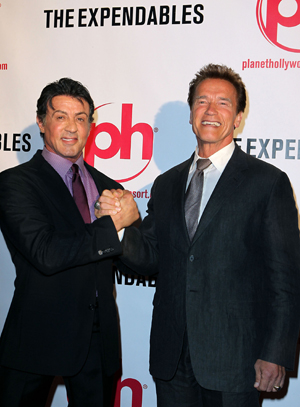 These two will never grow-up. Here’s the hilarity: when Arnold Schwarzenegger was wheeled out from shoulder surgery yesterday, he discovered that his old pal Sylvester Stallone was in line right behind him for a shoulder surgery as well!

“After all the action, stunts & physical abuse shooting The Expendables 2 and The Last Stand, it was time for a little tune up on my shoulder. Look who was coincidentally waiting in line behind me for his shoulder surgery. Now we’re ready for another round of great times and action when we shoot The Tomb,” Schwarzenegger posted on his WhoSay account.

The men are both in their 60’s, still prancing around, kicking evil villain keisters. Silly-billies!

Almost makes you want to belt out “Forever Young” at the top of your lungs or maybe “Don’t Stop Believing,” doesn’t it?

These two were the heroes many of us grew up on. It’s delightfully refreshing to see that age is but a number and after the doctors patch them up, Terminator and Rambo will protect the human populace once more!