Hair done, nails done. And look at that smile! That’s what simple hair rejuvenation can do for a girl. Lindsay Lohan proudly pranced around looking all chic at the amfAR gala — and with a different crowd. 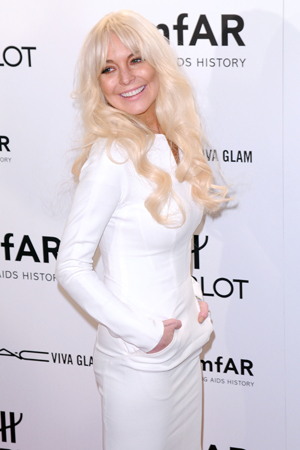 First, let’s talk hair. The actress exhibited her freshly platinum-ized locks and a heavy bang (which seems to be spreading in the fashion world faster than wildfire). But at first glance, doesn’t she sort of look like Goldie Hawn?

According to E!News, LiLo is pining for a role in Gotti: In the Shadow of My Father and hence is channelling more of a Victoria Gotti look. Eh, your call.

Here’s the interesting part. Lohan, who is known as a lively social butterfly, was seen being all high-fives-charades-at-my-place-next-week with the ever-quirky Woody Allen and his wife, Soon-Yi Previn.

No word yet on the meat of their conversation, but it’s so fun to speculate. So, let’s do it!

Maybe, a proposal for a skiing trip to Aspen; Lindsay will drive. A plan for a romantic comedy performed as a monologue — Macbeth-style. Perhaps it was a lightning round of knock-knock jokes between the three. Who knows?

Of course, there’s always a chance that it was a normal run-of-the-mill conversation between two stars, but nobody wants to hear that.

It certainly does not hurt having Woody Allen as a lunch buddy, especially if that Gotti role falls through. But let’s hope everything pans out for Ms. Lohan; we kind of miss her.