Well, in terms of surprises, Jersey Shore will take the cake any day. Slowly taking over the category of reality TV, the cast’s interviews prove to be as amusing as the show itself. 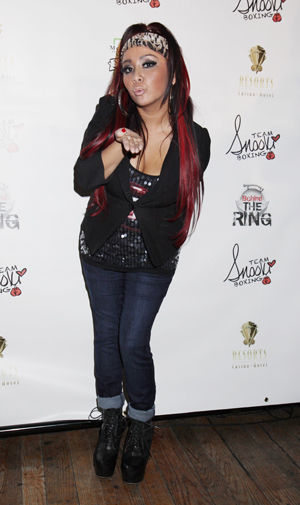 Much like in the ancient times when the Greeks awaited the prophecies from the Oracle of Delphi, so did the Jersey Shore fan-base patiently anticipate the revelatory knowledge to be dropped upon them by petite guidette Snooki.

Jersey Shore‘s JWoww and Snooki gave a cozy joint interview with The Huffington Post and spilled some interesting information.

For example, where is Snooks sitting on the sexual-preference map?

“I would consider myself bi,” she said. “I’ve done stuff with girls before. But I would never be with a girl… But I’ve experimented.”

The potential shock factor is really diminished here, considering who the information is coming from. Snooki could claim to be a marble figure carved by Michelangelo in Venice circa 1543 come to life, and the only shocking aspect of that statement would be that she knows Michelangelo was a sculptor.

But we digress, back to the interview.

Mike “The Situation” Sorrentino was a prominent topic of discussion, particularly his sexuality. JWoww revealed that she’s convinced he’s gay.

“His posture and the way he holds his cigarettes… everything,” she stated. “Listen, I know I keep talking about my best friend Joey, but his husband was closeted for 27 years of his life. And I knew him before he came out. So because of that I know… the signs.”

This sounds like a challenge. Tune in to the show and examine “the signs.” This could be a collective-culturally-relativistic-anthropological experiment. Document your results and share.