He’s going down, downtown! A warrant was issued for Bow Wow’s arrest after several failed attempts at getting him to comply with the law. 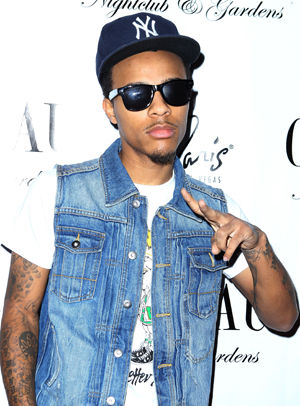 No, there will not be any puns about Bow Wow. Come on, people! That’s just plain insensitive when he’s obviously going through a ruff patch right now.

Yes, poor Lil’ Bow Wow was held in contempt of court and a warrant has been issued for his arrest. Put that in your doggy bag.

(We simply can’t resist a pun… especially when they practically write themselves!)

A tour bus company filed legal action against the rapper after he repeatedly failed to settle his bill or produce court-ordered documents. The judge has ordered Bow Wow to be taken into custody.

“All I know is im on a world tour and I gotta sold out show in Paris France tomar,” Bow Wow tweeted on Monday, “All they doing is making my album gain momentum.”

Other than ruining our faith in the North American school system, the rapper’s tweet also does not seem to convey a freckle of worry.

Bow Wow’s rep told E!News that a legal team has been hired to resolve the pending matter, but is that going to keep him from the dog house, erm, jail?