Karl Lagerfeld is getting some heat for statements made in a French publication. Adele’s fans are criticizing the designer for his big, insensitive mouth. 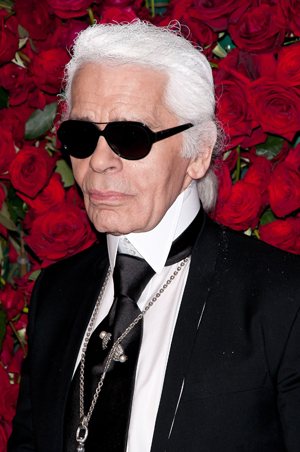 Karl Lagerfeld is not one to beat around the bush.

The German designer and current creative director for Chanel was a guest editor for Metro Paris today, and has unleashed his honest opinion upon the world.

Lagerfeld was asked for his thoughts on the rising American singer Lana del Rey and was thus inadvertently provoked into a flood of unscrupulous statements.

“I prefer Adele and Florence Welch,” he said according to E!News. “But as a modern singer she is not bad. The thing at the moment is Adele. She is a little too fat, but she has a beautiful face and a divine voice. Lana del Rey is not bad at all. She looks very much like a modern-time singer. In her photos she is beautiful. Is she a construct with all her implants? She’s not alone with implants.”

The Lana del Rey statement blew over and no one even raised an eyebrow.

But, of course his commentary on Adele‘s physique triggered a hurricane of criticism, from accusations of closed-mindedness to branding Lagerfeld as an “old bag of bones.”

Now, let’s digest that together. Is insulting the man from head to toe an effective way to convince him that speaking negatively (and so publicly) about Adele isn’t quite… honourable? Discussing a woman’s avoir du poids is always taboo — even under the banner of “curvaceous” or “voluptuous.”

But let’s remember that he discussed her from his point of view. It is his opinion. Somehow, freedom of speech is often confused with freedom-to-speak-nicely. It doesn’t work like that.

You don’t have to agree with him, but he has the right to say what he wants to say.

Adele is a talented singer with a voice powerful enough to awaken a dormant volcano. If anyone questions her talent — well, then we can pull out our fists.