Why send one girl home in an episode when you can eliminate three? Between multiple goodbyes, flashing boobies and surprise lap dances, this week’s episode of The Bachelor takes “unexpected” to a whole new level. Even for the Bachelor. 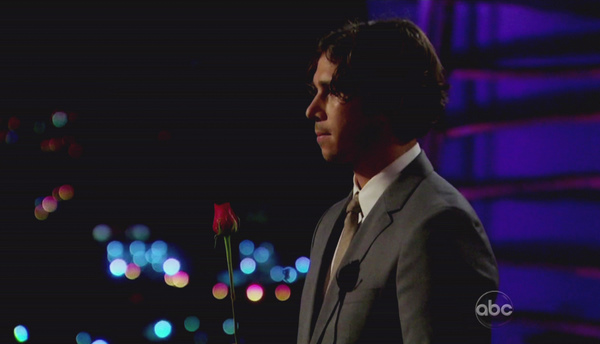 One might think that a visit to exotic Panama will only bring sunny beach volleyball games and prime tanning locations — but that certainly isn’t the case when one man is courting nine beautiful women simultaneously.

Right off the bat, an excited Kacie B. is granted the one-on-one date. But unlike the usual solo dates of bungie jumping and bridge climbing, as is common in past Bachelor episodes, the show suddenly turns into a cross between The Bachelor and Survivor as the two of them attempt to chop down coconuts, catch fish and make a fire on a remote island. After their rustic adventures, they sit down for a romantic dinner where Kacie opens up about her challenges with a high school eating disorder and is given a rose for her honesty. Between the cute baton twirling on the first date and her ability to really open up in Panama — could there be a final two in her future?

For the group date, Ben and six of the women head off to spend time on an island where the women are given what is essentially a crocheted, beaded necklace that Courtney elects to wear in lieu of a top. Ben later remarks: “I appreciated that…in more than one way.” He follows this up with the claim that because he was in a loin cloth, he felt the women should not have continued wearing their bikinis. This begs the question — is revealing the mid thigh the same as revealing bare nipples? Hmmm…

The date continues on in the usual group date manner with drinks around the pool. Jamie finally gets some screen time as she attempts to open up to Ben and make her first real move but Courtney’s persistent calls of “Hola” as she frolicks around in her bikini makes it a wee bit hard for Ben to stay focused. In the end it is Lindzi that is granted the group date rose.

Blakely and Rachel are sentenced to the dreaded two on one date where one girl will inevitably be eliminated. Despite some highly sensualized salsa dancing and a hand-made scrapbook of their relationship, Blakely is sent packing.

In the most surprising elimination of the night, Casey S. is pulled aside by Chris Harrison to discuss the fact she may still be in love with her ex-boyfriend. After a heartfelt discussion with Ben he expresses a wish that she had spoken up sooner and suggests she head home. With two girls gone, it’s on to the rose ceremony.

Jamie tries to pick up where she left off on the group date but between breaking into a fit of giggles and speaking aloud the anatomical breakdown of a kiss — Ben appeared to be a little confused. And when the final roses are handed out, Jamie is let go.

So it’s down to six and they’re off to Belize!

more articles on the bachelor

The Bachelor contestant survival kit
The Bachelor: Ego trips and breakdowns
The Bachelor’s Courtney: “You better check yourself b****!”