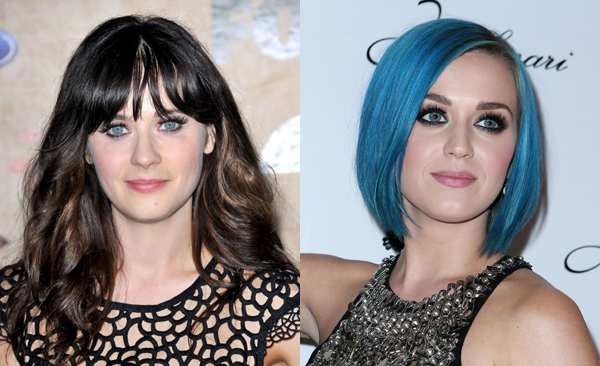 This is certainly not the first instance of a celebrity-ex face-off. In fact, the frequency of freshly single celebrities seeking the company of all-too-familiar faces is pretty high. It makes you stop and think: If the relationship with the original didn’t work out, why go after something that at the very least looks the same? Is it because they already know how great they look together? Are they afraid of change? Do they suffer from limited imagination? Or is it simply a type thing?

Kim Kardashian was furious when she discovered that Old Navy had cast her exact double, Canadian actress/singer Melissa Molinaro, in a commercial featuring Molinaro singing and dancing (Kim had recently launched her own music career), behaving like a diva, showing off her endowed backside, and giving us an all-around spot-on Kimpression. Then news broke that Reggie Bush, Kim’s ex-boyfriend, was dating Melissa. Who can blame him, really? He got all the beauty of Kim Kardashian, minus the 24-hour camera crew.

Evan Rachel Wood may be most recognizable as a fair-haired actress, but there was a time when her temporary raven-black coif made her a dead ringer for burlesque entertainer Dita von Teese. After Marilyn Manson and Dita called it quits, he began his eyebrow-raising, pearl-clutching relationship with the much younger Evan. Obviously, he’s got a thing for the very pale, sexy, ’40s gothic femme fatale look. Or perhaps Dita and Evan share not only a physical likeness, but a coincidentally similar courage to date Marilyn.

First came Gisele. Then came Bar. Then came Blake. Leo, arguably one of the most handsome men in Hollywood, is what you might call a “serial type man.” But honestly, can you blame him? Why not keep dating the most beautiful, long-blonde haired, long-tanned-legged, inhumanly gorgeous woman over and over again if you can? And anyway, what would he do otherwise with all those red-carpet suits designed to complement perfectly the Gisele/Bar/Blake type complexion?

Okay, okay, her doppleganger relapse was literally staged, but it still counts! When look-a-likes of Diddy, Ben Affleck and Marc Anthony — three of her most publicized romances — joined J.Lo onstage as back-up dancers for a number during a recent concert, she began tearing up. This stunt left people a little bit manipulated and perturbed, feeling as though she was using her personal heartbreak for entertainment value.