Lady Gaga does not strike many as a proprietor of a food establishment, although some of her ensembles do resemble confections. But nonetheless, here she is — the owner of a restaurant. With her first review out, how’d she do? 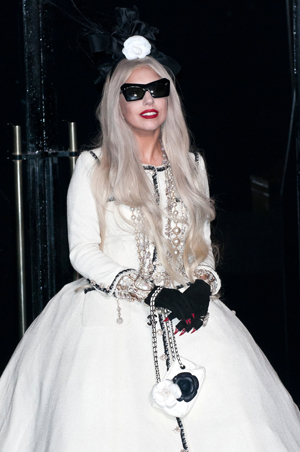 Not everyone is going cuckoo for Cocoa Puffs when it comes to Lady Gaga‘s new family restaurant.

The New York eatery, called Joanne Trattoria, is run by Gaga’s parents, Cynthia and Joseph, and was reviewed by a top food critic on its opening night.

Ouch — a bit harsh. So, what was the problem?

“You don’t expect a brand-new eatery to be running on all cylinders. But Joanne, owned by the pop superstar’s parents, last night was running mainly on acrid-smelling burnt vinegar wafting intermittently through the raucous dining room,” Cuzzo wrote.

“Clueless busboys wandered the floor, performing no other function than to pour tap water into sparkling.”

The critic went on to describe the unbearably long wait, the extremely fatty food and unjustifiably high prices.

It’s as if he’s describing Gaga herself — nonsensical, over-the-top, expensive but with no nutritional value.

Was it fair to review the restaurant on its opening night? Cuzzo fired back at critics, “The Germanottas, [Art] Smith [chef] and Gaga herself, with the windiest hype machine east of the Pacific, have been trumpeting the joint for months. For Day One, couldn’t they at least get some people who act like they’ve seen the inside of a restaurant before?”

When a celebrity of Gaga’s calibre endorses a restaurant, she should expect to be under deviously neurotic scrutiny, so in this case, the critic takes the cake.

Opening night is the business card of the restaurant to its potential customers, and it seems that Joanne Trattoria’s might have been dropped into a few shredders.