She’s definitely not the girl from Sonny with a Chance anymore. Demi is stepping away from her girlish image with a new photo shoot. 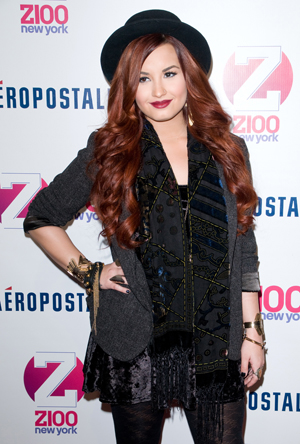 The actress-singer employed an old, well-tested method of shedding the Disney skin — a sexy photo shoot.

Yup, nothing repels parents of tweens better than nakedness.

Reportedly, Shields was borderline harassed by “Lovatics” requesting him to do a shoot with the singer.

The shoot included several photos of Lovato getting all bedroom-eyed with a lollipop, because everyone knows lollipops and other confectionary goods are sexy.

“No one has seen her doing anything remotely sexy. But she’s a grown woman now, and she wants to be sexy and feel sexy, and she wants to have these pictures forever. Little kids eat lollipops. She’s not a kid anymore, but people view her that way. It’s like, ‘So if you’re going to view me as a kid, then here ya go,'” Shields explains.

Who’s to argue with that kind of logic?

It’s true that Lovato is all grown up. She’s not a Disney poster-girl anymore and she does not have to keep up a squeaky clean image. And this is her visual statement to the world, if you will.

If you’re an adult, then you are an adult; if you’re sexy, then you’re sexy. If you have to fly a banner for either, then maybe you’re insecure.…