Now that’s a party, German-style. Michael Fassbender indulged in a healthy dose of good old-fashioned fun — so much so that he could not trust his own legs to carry him out. 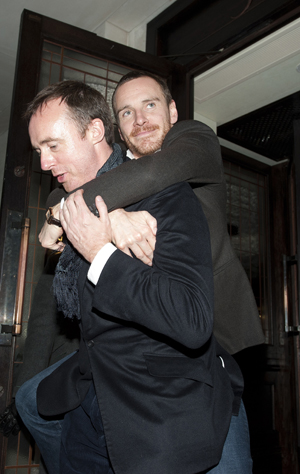 Waltzing with Viggo Mortensen, dipping Keira Knightley and playing a tune on the piano – all in a day in the life of Michael Fassbender.

According to E! News, the actor had a mishegoss of a night at GQ Magazine‘s London premiere after-party for A Dangerous Method, in which he plays Carl Jung.

The Sun reported that the actor was requested to leave the party because he got a little too rowdy, but the GQ editor Olivia Cole shot the story down via Twitter.

“Dear Gordon Smart of #thesun your story about michael fassbender at GQ’s party on Tuesday is complete fiction. *checkyourfacts* We were glad he was there and no one was asked to leave early, but hey, feel free to just make it up #thatsnotjouranalismitscreativewriting”

That’s cold girl, but completely justified. Nobody best be hatin’ on Monsieur Fassbender!

Even if he had to be piggybacked out of the party because his own legs were a little unreliable, psht!

That’s what friends are for.

If you can walk out of a party on your own two legs, it was probably not that great. That’s our philosophy.