Bob Barker speaks up about the Calgary Stampede giveaway on The Price is Right, calling it cruel and “disgusting.” 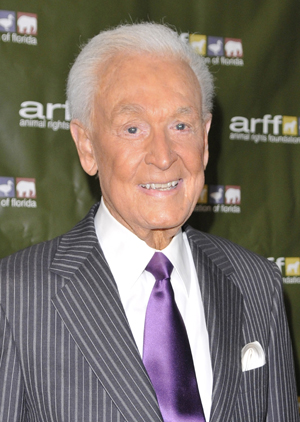 The former host of The Price is Right, Bob Barker, is boiling over with fury after the show gave away a trip to the Calgary Stampede on Wednesday.

Barker retired as host from the programme in 2007 after being with the show for 35 years. It is now hosted by Drew Carey.

“If I had been there, it would never in the world have happened,” Barker said in an interview with The Canadian Press. “This Calgary Stampede is just an egregious example of inhumane treatment for animals. To give that prize away, I think, is utterly disgusting.”

Now kids, if you are confused by Mr. Barker’s statement and/or are unfamiliar with the Calgary Stampede, prepare to receive some serious knowledge.

The stampede is an annual rodeo and festival held in — you guessed it — Calgary, Alberta. It’s quite notorious for it’s treatment of animals and many horses are driven to their deaths yearly.

As an executive producer Barker had some leeway in the giveaways and he tried to stir clear of furs or cars with leather interiors as prizes. But since his resignation, it’s anyone’s ball.

But we cannot give dirty looks to Drew Carey for this, since he has no control over the prizes — so cool it zippy.

The Calgary Stampede rolled it’s eyes at Barker’s criticism, saying that it has made loads of progress in the area of animal safety over the years.

That’s sweet. Progress is a beautiful thing especially in the world of animal rights activism.

An example of their jaw-dropping animal safety precautions? In 2010, a whopping six animals died at the Stampede. How impressive is that?

Ending a cruel hundred-year-old tradition is tough and very improbable, but we can at least not give away free tickets to it, eh?