Sex and the City beauty Cynthia Nixon has people talking — and it’s not just about her new hairdo. The actress is receiving some backlash for a statement about being gay. 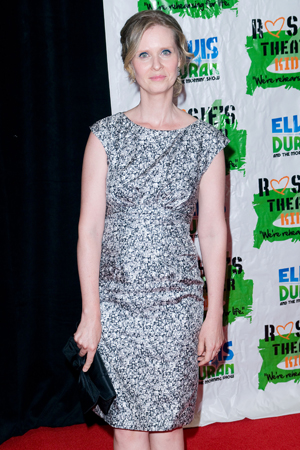 In an interview for The New York Times, Cynthia Nixon raised some eyebrows with a statement that, for her, being gay is a choice.

The actress, who recently went bald for a role as a cancer patient in the Broadway play Wit said:

“For me, it is a choice. I understand that for many people it’s not, but for me it’s a choice, and you don’t get to define my gayness for me.” She continued, “Why can’t it be a choice? Why is that any less legitimate?”

Nixon is currently engaged to long-time partner Christine Marinoni, who has given birth to the couple’s son, Max Ellington Nixon-Marinoni, last February.

She also has two children, Samantha and Charlie, from her previous relationship with Danny Mozes, which ended in 2003.

“I really feel like it was dangerous and irresponsible of Cynthia, especially in this environment today when so many young people are taking their lives,” stated celebrity chef Cat Cora in an interview on The Talk.

“I’m gay, and I was born this way,” Cora said. “I ask Cynthia to please, reach out to the community and say—to all the people who do hate themselves right now, all the young kids who are impressionable—to say, ‘You’re OK, take it one day at a time, it gets better.'”

A spokesman for the Gay & Lesbian Alliance Against Defamation has made no comment yet.

“The bottom line is that those who hate us, want to cure us, or even kill us don’t really take the time to understand these nuances,” Baim writes in The Huffington Post. “Others still try to get gays to suppress their sexuality, or transgender people to suppress their gender identity, no matter how they got that way.”