Demi Moore is seeking medical help for “exhaustion” and “overall health.” The Ghost actress has been reportedly negligent of her health post break-up with Ashton Kutcher. 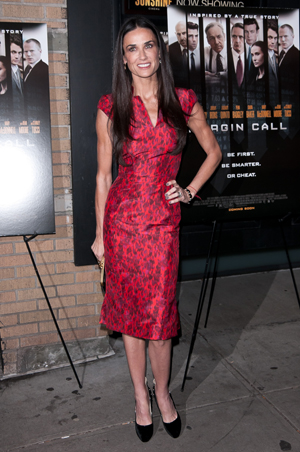 The paramedics were called to the actress’ Los Angeles home and after a 30-minute assessment, she was rushed to a local hospital.

Sources told E! News that Moore was “shaking” and “acting like she was suffering from a seizure.”

The 49-year-old actress filed for divorce from her husband Ashton Kutcher in November, after allegations of his infidelity surfaced.

“Because of the stresses in her life right now, Demi has chosen to seek professional assistance to treat her exhaustion and improve her overall health,” said the statement from Moore’s representative.

Due to this incident, Moore’s rep also confirmed she has dropped out of the upcoming Linda Lovelace film, in which she was cast as feminist icon Gloria Steinem.

According to RadarOnline.com, there have been reports that the actress is suffering from an eating disorder and it was an anorexia-induced epileptic seizure. No word yet from Moore’s rep.

Demi admitted that when her relationship with Ashton ended, it revealed several of her fears. “What scares me is that I’m going to ultimately find out at the end of my life that I’m really not lovable, that I’m not worthy of being loved.”

According to her rep, Moore is currently recovering and “looks forward to getting well and is grateful for the support of her family and friends.”