Will Julian Assange be the new Oprah? Don’t count on it. The controversial Internet activist is planning to launch his own talk show covering a wide spectrum of taboo topics. 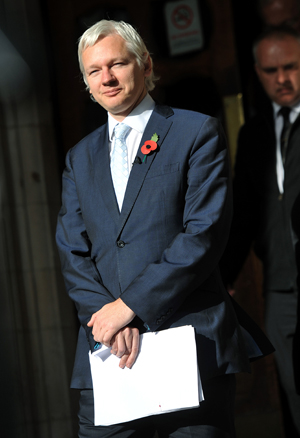 WikiLeaks founder Julian Assange announced Tuesday that he is launching his own television show.

The show is set to air mid-March and although no guests have yet been revealed, Mr. Assange promises “key political players, thinkers and revolutionaries.”

According to his statement, the show will feature “controversial voices from across the political spectrum — iconoclasts, visionaries and power insiders — each to offer a window on the world tomorrow and their ideas on how to secure a brighter future.”

No word yet on which channel has purchased the show and questions were redirected to the obscure Quick Roll Productions, whose website was created only a few weeks ago.

Julian Assange, infamous secret buster and the founder of WikiLeaks, released thousands of confidential documents about the wars in Iraq and Afghanistan, including private files revealing the frank opinions of U.S. diplomats on world leaders.

Mr. Assange is currently fighting against extradition from Britain to Sweden and questioning about the allegations that he raped two Swedish women.

According to the National Post, Assange insists that the allegations are politically motivated.

At the very least, we are assured that Mr. Assange will always deliver what we expect — controversy.