It appears that there’s a new dog in town — William’s four-legged surprise gift for Kate. The couple was seen snuggling during their walk with their new pet. 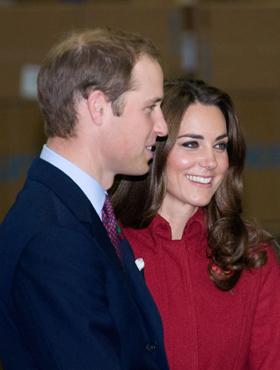 Just a few days after Kate’s 30th birthday, the Duke and Duchess of Cambridge were seen on a romantic stroll along the coastline in North Wales and they were not alone. The couple was accompanied by a tiny black lab trotting close by during the walk.

Rumours were circulating during Christmas time that Prince William was planning to adopt a new puppy as a gift for his wife, Kate Middleton. He reportedly requested the gamekeepers at Sandringham to find a hound from the royal estate’s bloodline. William and Kate are going to spend months apart this year, while he trains to be an air sea rescue pilot in Wales and she studies portrait photography in New York. The puppy was meant to comfort the Duchess during her time overseas.

The royal family is known to be full of dog lovers. Prince William grew up with a black lab named Widgeon, who was seen accompanying him to polo matches and shoots. Prince Charles and Duchess Camilla adopted a Jack Terrier they named Beth in August 2011. And the Queen has been the owner of a number of Corgis in the past few decades.

But the Royals are not the only animal-friendlies in the spotlight. The Obamas own a Portuguese water dog named Bo, who’s been spotted at numerous public outings. George Clooney has been the proud owner of a potbellied pig named Max for almost 19 years, and he has even shared his bed with the pig. Paris Hilton‘s Chihuahua Tinkerbell has popularised the term “Accessory Dog” and has been at numerous A-list events.

Celebrity pets are almost as famous as their owners — and they certainly get pampered just as much.

More on the celebrity pets