After Demi Moore and Ashton Kutcher announced that they are getting a divorce on Thursday, the questions started about what the REAL reason is for the downfall of their six year marriage.

The six year marriage between Demi Moore, 49, and Ashton Kutcher, 33, started off controversial. Despite the 16 year difference in their ages, the couple always seemed to be incredibly happy together when they were out and photographed. All that ended in September when a woman came forward and said that she had an affair with the current Two And A Half Men star, Ashton Kutcher, while he was on a trip to San Diego. 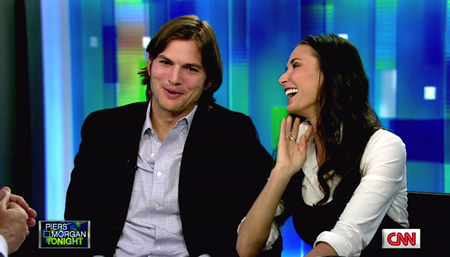 While Demi Moore and Ashton Kutcher always appeared to have a fantastic marriage, there were always rumours about what made it so great. Over the years the couple have been accused of being swingers. It was speculated that they joined other couples and trade off partners while having sex. There were also rumours in December 2010 from another woman who claims to have made a sex tape during an affair with Ashton Kutcher. Both Demi Moore and Ashton Kutcher denied those claims.

Demi Moore and Ashton Kutcher have always refused to address the concept of them having an open marriage. However, if it is true, wouldn’t it seem that Ashton Kutcher’s “affairs” were allowed? If this is the case, would Demi Moore have grounds to divorce him for infidelity? That then brings up the question on whether or not the couple are even legally married?

The announcement of divorce came from both camps. Demi Moore spoke first saying, “It is with great sadness and a heavy heart that I have decided to end my six-year marriage to Ashton. As a woman, a mother and a wife there are certain values and vows that I hold sacred, and it is in this spirit that I have chosen to move forward with my life. This is a trying time for me and my family, and so I would ask for the same compassion and privacy that you would give to anyone going through a similar situation.”

Ashton Kutcher then made his own statement on Twitter stating, “I will forever cherish the time I spent with Demi. Marriage is one of the most difficult things in the world and unfortunately sometimes they fail. Love and Light, AK.”

What do you think? Is the latest celebrity divorce justified or could it be that Demi Moore is just jealous at the younger women Ashton Kutcher has been rumoured to be having sex with, and finally had enough? What do you think the real status of this May-December romance was?

Are Ashton and Demi legally married?

Is the Moore/Kutcher relationship and open one?