Mariah Yeater, who claims that Justin Bieber fathered her baby backstage after a concert last year, has dropped her lawsuit. She still insists the pop star is her baby’s daddy. Justin Bieber still denies ever meeting the woman.

Mariah Yeater, represented by her lawyer on Wednesday, dropped the lawsuit claiming that Justin Bieber was the father of her baby. Her lawyer however claims they are not dropping the case. It is their goal to settle it out of court with Justin Bieber, having him do a DNA test which they claim will prove he is the father, and then get a child support order in place, without having to go through the legal system. 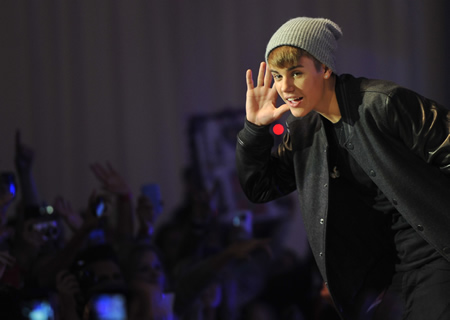 Justin Bieber claims he has never met the woman, that he has never had sex backstage after a concert, and that he is more than willing to take a paternity test. His representatives claim there is one in preparations. Justin Bieber is currently promoting his Christmas album overseas in Europe and is still in a very happy relationship with Selena Gomez.

Justin Bieber’s spokesman said that it is “sad” that someone would fabricate such a malicious, defamatory, and demonstrably false claim. We’ll continue to consider all of our options to protect Justin.”

Jeffery Leving, Mariah Yeater’s attorney, claims that Mariah was receiving death threats and being hounded by the media. He will not go so far as to say that is why she dropped the lawsuit against Justin Bieber, but many are speculating that that is the reason.

We think Mariah Yeater is just trying to avoid a statutory rape charge since Justin Bieber was underage when they allegedly had sex.