It took a single season before Lifetime decided they had seen enough of Rosanne’s Nuts. The network has no plans for a second season. The show has been cancelled.

This is unfortunate news for those of you who were fans (although, we know there weren’t many) of Roseanne Barr’s Lifetime reality show Roseanne’s Nuts Lifetime has made the decision not to renew the series for a second season. There will be only one season of Roseanne’s Nuts due to the disappointing ratings it garnered. It seems as if maybe the name of the show brought some curious viewers, but once the novelty wore off, so did the viewership. 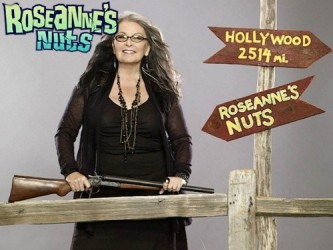 SEEMED TO BE OFF TO A GREAT START

Lifetime has lost interest in Roseanne’s Nuts after just one season on the farm. The reality series followed Roseanne Barr along with her partner Johnny Argent and her son Jake Pentland as they worked at their macadamia nut plantation and livestock farm in Hawaii. The show Premiered in July to 1.3 million viewers according to Nielsen. The early ratings success didn’t last long, and as viewers slowly lost interest, Lifetime tried adjusting Roseanne’s Nuts. The network tried to bring back viewers by moving the series from its original Wednesday timeslot to Friday. The show lasted just 16 episodes before Lifetime was forced to cut Rosanne’s Nuts. By the end of the first (and only) season, viewership had dwindled to less than half of what it was for the season premiere.

ROSEANNE IS NOT DONE JUST YET

Roseanne Barr Tweeted “Rosanne’s Nuts has been cancelled” on Wednesday and “Thanks everyone for watching!” Although the reality show is no more, Barr has a project in the works right now with 20th TV, which would see her come back to scripted comedy. Rosanne is definitely no stranger to scripted comedy, and her newest project called Downwardly Mobile is expected to be much like the show that originally made Barr a household name, her original hit show Rosanne. This would be Barr’s first scripted comedy since the ninth season of Rosanne ended in 1997.