As the new star of one of television’s top sitcoms, Two and a Half Men, Ashton Kutcher gets to enjoy some major perks. One of those perks is deluxe trailer fit for a very well paid actor. We know you want to see the pictures of Ashton Kutcher’s trailer, so we got them for you! 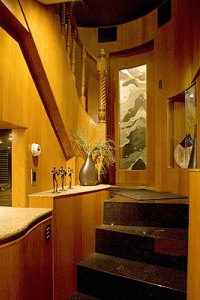 from the hustle and bustle. What would it take to help you clear your head for a bit? Perhaps a walk? Ashton Kutcher puts his feet up in a 1,000 square foot luxury trailer

During his down time on the set of Two and a Half Men, Ashton Kutcher (age 33) will spend time relaxing inside his luxuriously large trailer; equipped with seven 60-inch 3D plasma TVs, two bathrooms, a fully stocked kitchen with granite counter top, and a conference area. Of course – every actor needs seven televisions!

Lucky for actor Ashton Kutcher, the network (CBS) will be taking care of the $8,500 per week rent! Can you imagine?? The rent for Kutcher’s trailer is minor compared to his per episode salary of $1 million for 26 episodes!

This “home away from home” also boasts side sections that expand out (shown below) as well as a second floor that is lifted on hydraulics from the main body (above). Heat, air conditioning, lights and blinds are all controlled by a wireless touch screen to keep Ashton Kutcher in the utmost comfort! 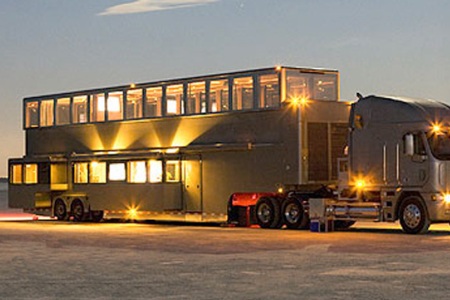 Two and a Half Men

Reports on People.com show that Kutcher has been well received on the set of T 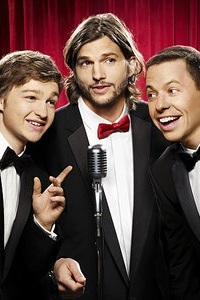 It is said that Charlie Sheen’s character (Charlie Harper) is shown running off with Rose (Melanie Lynskey – his quirky neighbour) to get married in the season premier (and Sheen’s last episode). The day after Rose finds Charlie in the shower with another woman, Harper “accidentally” slips on a set of subway tracks and is…killed to say the least. According to People.com the whole storyline follows in the same comedic tradition of previous seasons.