Sometimes you can’t go home. In this psychological thriller, Amy (Kate Bosworth) finds that out the hard way. 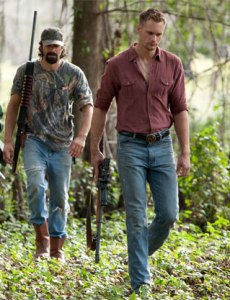 South, where there are still “good old boys” and outsiders aren’t accepted. Some have criticized the producers for moving this movie away from England and into the US while other respect that it has made it relevant to today’s tastes. Whatever your thoughts, Straw Dogs looks like a great movie with tonnes of action… just what I like !

Screenwriter David Summer (James Marsden) and his wife Amy (Kate Bosworth) move back to her hometown after the death of her father. There, they encounter Charlie (Alexander Skarsgard – True Blood) who is hired on to take care of some repairs . What follows is pure adrenalin and action in this psychological thriller as a husband is pushed to his limit protecting his wife and home.

During one of the scenes, Charlie sexually assaults Amy. According to the actress, the terror we see in Kate Bosworth’s face is 100 percent real. She had told Alex to really let go and get into character for that scene. She wanted it to be as real as possible – to help draw the audience into it. And that’s just what Skarsgard did. He’s a big guy and I think that most women might not have been as willing to give up that kind of power; even if she were getting paid.

I can’t wait to see Skarsgard in this role; I’m used to seeing him as Eric on True Blood so this will be quite a change. Although Skarsgard’s vampire character has implied strength and power, Charlie shows it! Why would you miss this one?

Check out the straw Dogs trailer