The multi-award winning 70s musical group, The Stampeders are hitting the road once again, just like Â“JackÂ” of Hit the Road Jack, the cover tune they made famous. 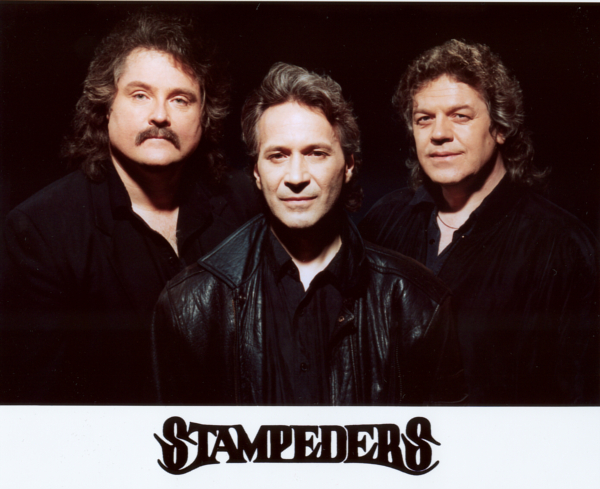 The Stampeders had gone through a number of incarnations before it became the three man group it is today. Originally from Calgary the members moved east to Toronto in the 60s. The group consisting of vocalists Rich Dodson on guitar, Ronnie King on bass and Kim Berly on drums, had their first hit with Carry Me in 1970. Other international hits included Sweet City Woman in 1971, Devil You, Wild Eyes, Oh, My Lady and Hit the Road Jack, of which the late DJ, Wolfman Jack, can be heard.

The Stampeders also starred in their own CBC Television special in 1974, A Short Visit To Planet Earth. “Back then there were only three channels, so it was a really big deal to have a one hour special,” informs Dodson.

Over time, the band went their separate ways, but reformed in 1992, after a “What Are They Doing Now” appearance on the Dini Petty Show, resulting in many requests to perform concerts. “We got all kinds of calls, and that got us all back on the road again…firing up the old show. It just came to us naturally,” states the guitarist.

By 1998, they were back in the studio again recording another album called Sure Beats Working, which Dodson says with a chuckle, for them…that was really what it was all about.

The Stampeders are working on a new CD, their first live concert album since 1973. Recorded this summer in Moose Jaw, Saskatchewan, the CD is due to be released before Christmas. Fans will hear favourite hits from the past, along with a few new original songs.

When not touring, The Stampeders use social media sites like Facebook to keep in touch with their fans of all ages and from across the country and the world. “Touring is what we are. It is what we do and we really enjoy it,” insists Dodson.

“With flying the way it is, we just book our flights from everywhere and we just all land in the same town,” explains Dodson. “We just hop in the mini-van with our sticks, picks, guitars and bags and away we go. We’re a fairly lean outfit …all the sound, lights and backline gear is provided by the venue. So, it’s not drudgery. It’s more like going on a holiday!”

Check out The Stampeders.