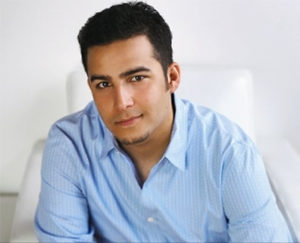 Where to find him: Hopping between gifting suites, film premieres and hot Hollywood parties.

How do you prepare for TIFF?

I try to get in a lot of practice standing in long lines. Roller coasters, farmers markets, Lawrence Gowan autograph signing. You name it, I’ve waited for it.

What five things do you need to survive the festival?

Stainless steel water bottle. A partner you can trust. Silver tipped hollow point bullets. The unflinching, ironclad will necessary to shoot down even your own brother if the werewolf zombie army gets to him. Cyanide pills in case the unspeakable… wait… survive TIFF? Oh. A scarf would be good, probably. It gets chilly on those rooftop patios.

If you could meet one celeb/filmmaker, who would it be and why?

That little robot from Wall-E seems like he’d be pretty chill.

Eating sushi served on a lady at the Young People Fucking premiere party at Wicked (which is usually a swingers club). While my mom was there.

Have you ever been star struck?

Yeah, but I was asking for it.

What’s the best advice you can give to a film fest newbie?

I feel like “don’t take advice from actors” is probably the best advice I could offer.

What’s your most memorable TIFF moment?

The first time I really experienced TIFF was also the first time I had a movie at TIFF, so that entire time was pretty special. Being at the Varsity, in a sold out theatre, for the first screening of Young People Fucking was certainly a career highlight. Also, at the Q & A, I zinged a guy who had a snobby question about the lack of ethnic diversity in the film. I feel like I got back at a lot of bullies in that moment.

Where do you go to hide away from the buzz and flashbulbs of the festival?

What are you most looking forward to during this year’s fest?

See if Wicked still has that sushi bar.

Why is TIFF so great?