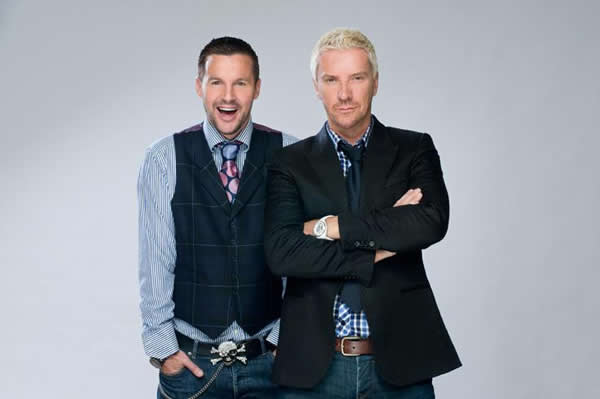 Known to TV audiences as Colin and Justin, the partners – on the small screen and in real life – are much in-demand. “We’ve been jumping back and forth between Toronto and Britain,” explains Justin. “We’re filming a brand new design show for ITV1 in the U.K. called, 60 Minute Makeover. On the show, we do a beautiful transformation in 60 minutes—it’s all done with clever choreography and a lot of forward planning. The show is on BBC Prime.”

“Our program for HGTV Canada, Home Heist, has gone on to sell to 25 territories so far, including the U.K., Australia, Scandinavia, South Africa and on BBC America. When we tell our Canadian audiences that, they’re quite proud. They think it’s fantastic because we’re flying the flag of Canada. What we’re actually doing, though, is telling the whole world that Canadians have bad taste! So, I apologize now,” says Colin.

Last year, Colin and Justin left the comforts of the design world to appear on the hit Australian television series, I’m A Celebrity Get Me Out Of Here. “They actually drop celebrities into the Australian jungle,” says Colin. “I had to skydive from 12,000 feet to a 7,000 free-fall and then 7,000 with a parachute. Justin had to ride through rapid rivers on horseback. It was a great experience; we were there with George Hamilton, a fantastic actor, and Samantha Fox, the disco queen!

“We fell in love with Australia. I got out first. So, while Justin was filming, I got to experience Australia. I would go to a restaurant and people would buy me dinner because they knew me from our Home Heist show.”

In the winter 2011, Justin and Colin head back Down Under to do a makeover show for Australia’s RTV Channel, but not before spending two months at home in Glasgow performing as the Merry Men in Robin Hood at The Pavilion.

A surprise to many, the pair are both accomplished singers and have been recording tracks for their forthcoming pop CD. It’s being recorded in studios in the U.K. and Canada and they’re working with some of the best producers and songwriters both countries have to offer.

“I think life is about immersing yourself in as many different things as possible,” says Colin.

Would you like to have Colin and Justin do a makeover in your house!? One of you lucky peeps could win a $15,000 FREE design makeover. Colin and Justin are presently looking to find Canada’s most ‘design negative’ room! Find out all the contest rules here. Good luck!

Some Do it yourself design Ideas